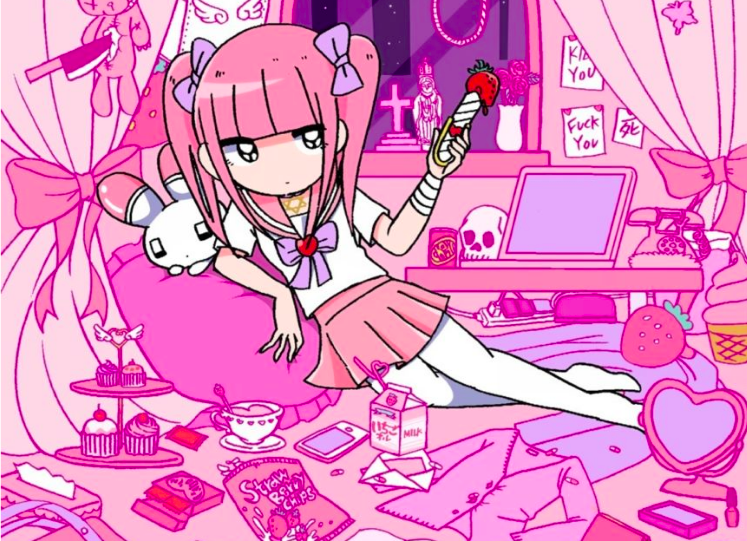 Have you heard of Ezaki Bisuko?
His manga may appear cute, but actually features wrist cutting, syringes, and other sickly motifs.
His illustrations represent the gap between cute girls and the darkness hidden within their hearts.
Ezaki Bisuko has become popular for his relatable and cute artwork.
The contrast between the dreamy colours and sickly motifs is “yamikawa“💘
Menhera-chan has collaborated with multiple popular brands, including ACDCRAG and LISTEN FLAVOR 💕

This yamikawaii character is defined by the combination fancy and pastel colours with dark motifs such as needles, drugs, bandages, knives, and crosses 💉

Having started on pixiv in 2014, Menhera-chan has since featured in a variety or original goods, including books, apps, stationary, and fashion collaborations 💊
There has even been a collaboration cafe, and multiple Menhera-chan themed events.
She’s especially popular with high school girls and yamikawa fans!✨

You can read Menhera-chan in Japanese on pixiv 🍓→Official pixiv

The main character, Menhera-chan, is a bullied school girl.
One day, she discovers that she can use her cutter knife to transform and fight evil…!
Menhera-chan becomes a magical girl, fighting evil with her friends.

Fans were charmed by the combination of cute and sickly, including how the main characters transform by cutting their wrists 💜
The manga is published on pixiv ✨

“Menhera-chan: A sickly girl in her second year of middle school. With a slash of her cutter knife, she becomes a warrior of justice who can defeat evil in one hit. She can be a little rude.”

“Yumekawa-chan: Active as a Wrist Cut Warrior. She admires Menhera-chan and Subcul-chan, and originally tried to copy them. She later became an official member. The inside of her head is like a flower garden.”

“Subcul-chan: Menhera-chan’s classmate and fighting partner. Calm and cool. Her way of speaking is elegant but she has a slightly poisonous tongue.”

💊We want it all!♡ Check out these yamikawa goods💊

Decorate your room with these yamikawa items 💜
If you love yamikawa or yumekawa, then these Menhera-chan goods are a must-see.
Let’s check them out♡

That’s just a few of the available items.

Add a touch of yamikawa to your daily life with these unique goods 💉
Follow Ezaki Bisuko on Tumblr for regular updates.

病みカワ戦士 メンヘラチャン Official Fan Book (KITORA)
You can view all of the previous goods in Menhera-chan Official Fanbook, which can be shipped internationally 💜

Ezaki Bisuko has produced a variety of products, not just Menhera-chan ♡
Each illustration shares the same cute and colourful style that can be found in Menhera-chan.
His Twitter page is super popular, so you might have already seen these before…

An essay-comic which showcases the daily life of Ezaki Bisuko and his boyfriend, Mitsu-kun.
Unlike Menhera-chan, you’ll be healed by the gentle and warm atmosphere of this sweet comic✨
You can watch over the happy couple in this heartwarming book 💓

激動のまなぴす 生きたいように生きる女子道 (ピクシブエッセイ)
The story of Manapisu, a girl who has to survive in a modern society.
Many girls will be able to relate to Manapisu’s way of viewing the world! 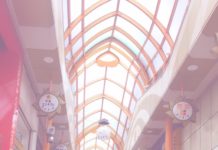 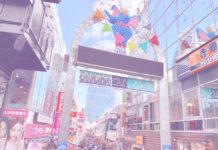 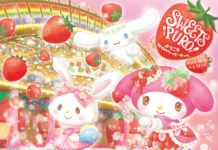 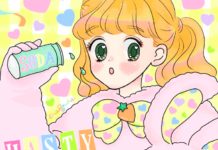 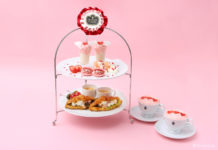 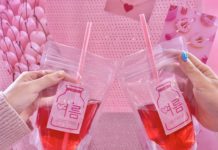